Over the past year or so, I have been helping a small games company called Atomicom develop a new game. But how does a person like me fit into the gaming world? Well I was given the role of scientific advisor – simple task for a PhD in astrophysics right? think again.

JCB Pioneer Mars is a strategy survival game where you must survive, build and mine on Mars. Set in the future, you can expect to find futuristic JCB mining vehicles and stunning visuals of a Mars-esque world. 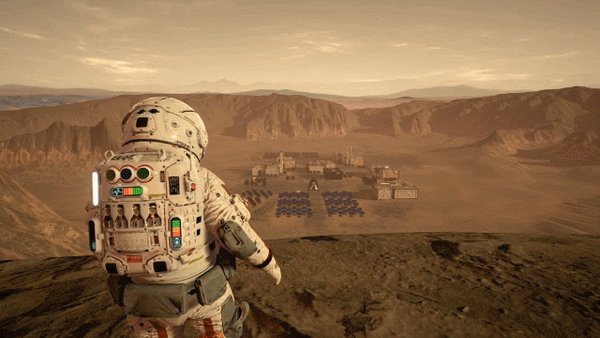 The problem with introducing science to a game is keeping it from being boring. To me science has always been fun, but to your average gamer who is constantly bombarded with action, how do you think he will find the desolate Mars surface? In games there can be a constant struggle between keeping science facts true and the game interesting.

The conditions on Mars are very extreme, with super cool phenomena such as global/local dust storms, dust devils, meteor impacts, and more. These features however according to game developers these are not near enough exciting as they can be.

Typical wind speeds on mars are about 20 m/s that’s an 8 on the beaufort scale, a gale but nothing life threatening… in the game these winds appear much faster and are able to lift considerably large martian rocks/dust.

Spinning columns of dust “dust-devils” roam freely, towering kilometres wide and meters wide, although on Mars you can expect to see a handful of dust devils a day, in game expect to see dust devils travelling in pacts and with electrifying capabilities (yes you heard me correctly :S).

With meteor impacts on Earth, we barely get much of a light show (and that’s with an atmosphere to burn up in!). On many games however you will see meteor storms come like a showering rain of fireballs…. I have no comment…

Don’t get me wrong. The Mars environment is an extremely harsh one, and to survive on Mars is going to be difficult, but why games need to make conditions a million times harsher I will never understand…

Lastly I’d like to point out how ridiculous it is to name things with a “sciencey” name because it sounds cool regardless of its accuracy is just mind blowing to me. One conversation I had went a bit like this:

Colleague: “Of course it is what’s wrong with it?”

Me: “Well spectral analysis means you look at the whole spectra to see emission/absorption at different wavelengths of light, you wouldn’t do that to check vehicle is operational”

Colleague: “Yeh but spectral sounds cool. It means light and we use visual inspection ”

Me: “If you only rely on visual then its not really using the whole spectrum…”

Colleague: “Well maybe we use X-ray and infrared too. You know like Superman’s X-ray vision… how does that work?…..”

Any way to cut a long story short, that has been pretty much my experience of working in the games industry. You give advice, most of the time they don’t take it and if they do, expect it to be nothing like you said, but at least you’ve taught them something.

Actually  to be fair a lot of science did make it into the game, including real data from HIRISE and the Mars rovers to give a realistic experience. At the end of the day, the game looks stunning and I’m certain that it will be an amazing experience to play, even if it is a bit over exaggerated.